Get ready for this wild ride. I’m so lucky to have been in Boston on the Fourth of July, because that means I get to celebrate America’s birthday in its birthplace.

For me, the festivities began on July 3rd. I met my friend from Newton at the Arlington T stop so we could go to the rehearsal of the Boston Pops concert and fireworks show. The annual concert, held on the Charles River Esplanade, is such a huge event that they have a full-fledged rehearsal that’s the exact same as the real show on July 4th. Except the July 3rd show is a bit less crowded (and sans fireworks).

We arrived and walked the streets by Beacon Hill, waited in line for security and got our wristbands that gave us access to this grassy field in front of the Hatch Shell, which is the actual concert venue stage.

It was sunset and we caught glimmers of light from the river. I saw red star balloons. Everyone was sprawled out on blankets and towels with their friends and family, waiting for the 8 p.m. show. At about 7:30 p.m., they opened the VIP section up to the plebeians like me. That means we got to sit on real white fold out chairs instead of the grassy ground, plus we were so close to the stage. You don’t get seats like that on July 4th, so going on the 3rd was definitely a local’s hack.

The Boston Pops, an orchestra, played some classic patriotic songs and even had guests dressed in revolutionary war garb. We also watched two journalists from Bloomberg News moderate the event, but their lines were pretty cheesy about “Boston strong” and wearing high heels all night.

The concert has guest performers, and this year’s were Brian Stokes Mitchell, Melissa Etheridge, Andy Grammer and Leslie Odom Jr. (The latter two I was most excited for, as a fan of the pop singer and “Hamilton” performer, respectively). Odom Jr. showed off his amazing range by singing a belty song from “Rent” in addition to “Wait For It” from “Hamilton.” Andy Grammer sung his hits “Keep Your Head Up” and “Honey I’m Good,” along with his new number “Give Love.” It was my third time seeing Andy Grammer perform and my second time seeing Leslie Odom Jr.

Not super star-studded in my opinion, but amazing talent. It was a beautiful Boston night with warm air, a relaxing river setting and American spirit. There was even an ’80s song sing along (with “Girls Just Wanna Have Fun”) and a patriotic song sing along (with everything from “Yankee Doodle” to “America the Beautiful”). The night ended with LOUD cannons blasting to the “1812 Overture.”

Phew. Now we get to the actual day-of. July 4th in Boston. I woke up and headed to Government Center to watch the reading of the Declaration of Independence from the balcony of the Old State House, where it was read on July 18th 240 years ago.

Volunteers handed out tiny American flags. A parade marched in around 10 a.m. with men and women in bonnets and some militia attire. Two police and fire employees read the Declaration of Independence and the 20-minute event concluded with red, white and blue confetti (naturally). 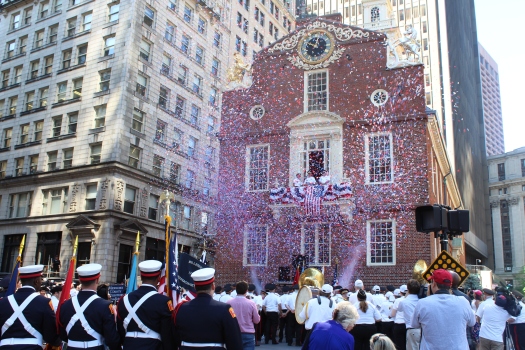 I recommend going if you’re in Boston, since it’s a unique way to celebrate with a couple thousand people in the middle of the street. The state house itself is impressive with its brick exterior in the heart of skyscraper city. I even met some new friends, a mother who works at MIT and her daughter visiting from Austin who goes to Tulane. 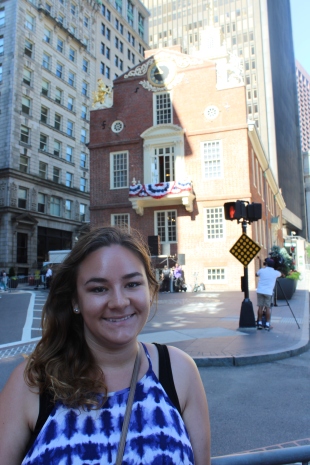 I spent the rest of the day in Newton, Massachusetts at a cute neighborhood celebration/picnic/barbecue with my friend. We had ice cream and kids ran races in a huge park/playground. Then we went for a swim in Crystal Lake (I floated on a raft in this refreshing manmade lake), checked out a local art fair with a lot of political vendors (people take running for city council very seriously) and had a barbecue at her house with homemade lemonade that I squeezed. It was a very homey feeling even though I was in a faraway city without my family. I could see a few fireworks from my window that night, concluding my celebration of America’s birthday in Boston.