Our last day in Italy started off wrong. We planned to go to Saint Mark’s Basilica early but when we got there at 9:30 a.m. (It opens at 9:45 a.m.), the line was extraordinarily huge. Instead, we decided to make the most of our vaporetto 24 hour pass and travel to Burano, another island near Venice.

Things took another unexpected turn when we got on the 4.1 boat, told to get off at Giardini and take a boat directly to Burano. Of course we get off and no such boat exists – we’d have to take a boat to Lido island then onto Burano.

I walked around the little stop at Giardini for a few minutes, to explore the Central Park-like area. It was a hot day and we found an old carousel – all that’s left are the rusted, main axis poles in a very poetic shot. 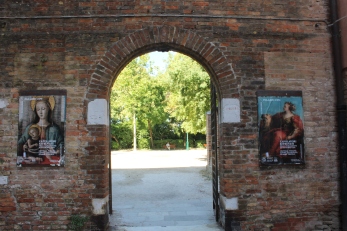 Behind the park, a little brick arch leads to some small streets with chipping paint, a boy running down the street, clothes hanging to dry, graffiti and overall serenity in the area that is devoid of tourists. These types of streets are one of the best pars about Venice – the main route on the main island is so crowded, like a constant stream of sardines down roads lined with designer shops. These hidden corners are the real Venice, one where locals watch you because you’re the only strange one with a camera.

I continued on the 4.1 to Murano, hoping then to get a boat to Burano. Another mistake, as 4.1 stops every 5 minutes practically and it took over an hour to get to Murano, a distance that took les than 15 minutes on yesterday’s private boat ride.

Even once we got in the Murano vicinity, the stops go all the way around the island (there were at least 5 stops on Murano) and we were the last one, Farro. It was near the rocky dump beach so I looked for glass for a few minutes, but all the travel of the trip caught up with me and I was in a lot of physical pain – both of my ankles were twisted, my back always hurts and it was the hottest day in Venice so far. At 11:30 a.m., we caught the 12 boat to Burano. Supposed to be a 15 minute trip, it naturally took more than 30 minutes because nothing could go our way. And it was completely packed – I didn’t know Burano was so popular. It’s a small island known for lace making and colorful houses, but there sure were a lot of visitors willing to squeeze aboard.

My family thought the three hours of travel time was worth it, and I won’t say they’re wrong but it was indeed a long journey. The island of Burano was adorable, much like Cinque Terre. It reminded my mom of Portugal, she said, with rows of houses and sheets hanging to dry.

We followed the stone path through the main route, which had a canal running through. It’s a very different vibe than Venice, because it’s quieter and not as accordion-romantic-Italy cute, but more beachy cute. You can wnader down narrow alleys between houses that open into courtyards lined with the most colorful houses you’ve ever seen. Bright yellow, magenta, green, peach, orange, turquoise. The only thing that was strange is that the paint seemed new- like they paint their houses this way on purpose to attract tourists. Only a few had chipping, old paint. All were still very fun to visit. We had a few slices of pizza along the main route and got some nectarines and a huge bottle of water at a local grocery store.

We decided only to spend about an hour at Burano in order to catch the 1:25 boat back since our passes expire around 2 p.m.. This left us a little crunched for time, but we still felt like we got the overall vibe of the island – we just didn’t have time to sit down and observe.

It sure is weird that there are backway canals just lined with houses and only a few tourists walking the streets. In the USA, this would be like the most popular vacation destination but here it’s only a few stragglers from Venice. Much like Murano, it taught me that the best part of Venice is getting off the island. Next time I should stay on one of these islands instead, if possible.

Before boarding, I grabbed a strawberry gelato at the ristorante right in front of the vaporetto dock.

The boat took us to F. Nove, which is on the north part of Venice. We decided it would be faster and cheaper to walk back to the hotel near San Marco. It took some crafty skills on my mom’s part but we did make it back. We knew the general directon, followed signs to San Marco and knew that the streets all lede the same way. We got a chance to take the road less traveled down these narrow streets, passing two floral shops as we clung to the stone wall that was in the shade.

It’s difficult to describe the streets of Venice, but they’re rather tall and narrow and straight, with shuttered windows and many muted beige/mauve colors. Occasionally you cross a marble/stone bridge over the canal, where you can see the buildings wind around the canal. There are rarely walking paths right along the canal, which I found strange. The doors lead straight into the water and boats.

After quickly freshening up at the hotel, my mom and I set out for Saint Mark’s basilica, to see the inside finally after three days in Venice. The other two didn’t want to come. The line clung to the left side of the Basilica and tried to stay in the shade. Despite being free, the church only took about 20 minutes to get into. 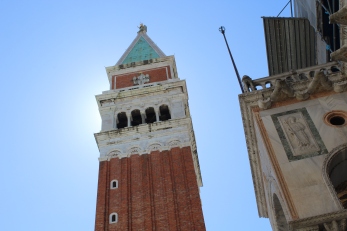 Unfortunately no photos are allowed inside. It was very dark with metal hanging plates that held red lights. The entire ceiling (as in every corner) was covered in little mosaic tiles, most of it gold as the background color with religious pictures displayed. It’s hard to believe they used little tiles to illustrate such detailed images, but you can also see on the floor how they cut the tiles to create the patterns. Marble was also used to create intricate designs on the floor, a lot of them were symmetrical with triangles, but my favorite part was the gold shimming ceiling. I had my neck craned to look – it’s like a marge with the east and Byzantine art.

My mom shopped around the backstreets behind San Marco square after we left the cathedral, looking for souvenirs. We passed through an alley that’s the backside of the coffee shops of the square, where employees in white suits went out to smoke.

It was about 5 p.m. when we arrived back at the hotel and, having dinner reservations at 7:30, we took a couple hours just to relax, shower, pack and catch up online.

The final meal was back at Trattoria al Gazzettine. Dusk is my favorite time of day in Venezia; we darted through the people streaming down the street and made our way to the friendliest restaurant in Italy. It was pleasantly cool outside and full of merry peoply being welcomed into restaurants by greeters outside. 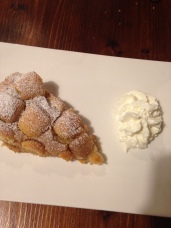 I was debating between Spaghetti carbonara and pappardelle four cheese. Since the former seems more common in the US and because the owner said the four cheese was good, I went for that. It arrived within 10 minutes, a rich dish of wide noodles with the best cheese cream sauce. It’s the real alfredo that people aim to taste — seeming to be a mix of mozzarella, parmesan, gorgonzola and perhaps bleu cheese. Once again we were given two free desserts, we ordered two amoretto crostinis (very soft with almond paste) and got a free bottle of wine as our gift of the day. This restaurant is magnifique. The staff continually check on us to see if we like it, the food is amazing, it’s reasonably priced at 90 euros for four people and they treat you with free goodies.

Like last night, we enjoyed the fading pink sunset by turning from San Marco towards the sea and walking east past cheap vendors. I love the atmosphere with lit up firey clouds, sloshing water, salty smell, gulls, and crossing bridges so we can see the canal. I could sit by the water all night and just stare up at the sky and moon. That’s my perfect vibe. Unfortunately, I’m exhausted with a million things to do so serenity can wait.