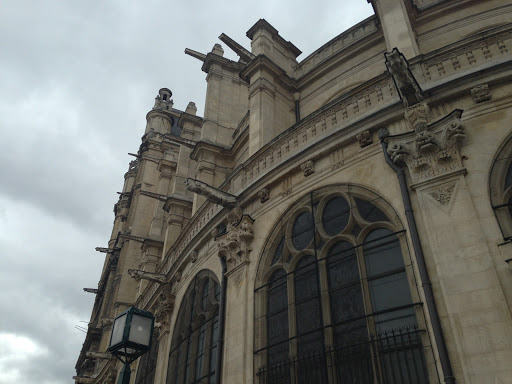 On Wednesdays, we go to the market. I got some baby cucumbers, strawberries, a ham bread for breakfast, and a leather purse for myself as a souvenir. One of the stall workers at the market, upon hearing my English, asked where I was from (“England or America?”), then proceeded to say “California or Texas?” I thought it was a stereotype that foreigners group U.S. regions together, but apparently not so much.

Today was our last formal lecture, during which we talked about the French revolution, reminding me of our trip to Versailles. After my chicken crepe for lunch (I have to eat more of them while I have the chance before I leave soon), we embarked on our walk. We passed by a modern art museum and a park with lots of street art. 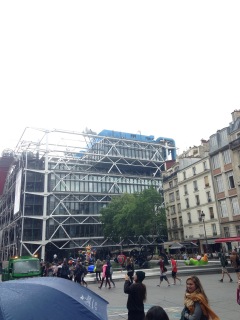 The tour also took us outside the oldest private residence (house) in Paris – that of Nicholas Flamel. Like in Harry Potter. 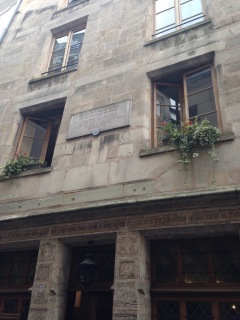 We walked down many streets, like the rue de Montergeuil, which had many cafes and shops. Our walk ended outside of a gothic church called St. Eustache. I feel like I’ve seen so many beautiful churches on this trip, and this was no different. 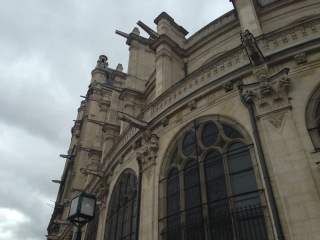 It was enormous inside, with huge towers holding up the ceiling. I think this was the highest ceiling thus far, I genuinely felt like I was in a giant’s church. So impressive. 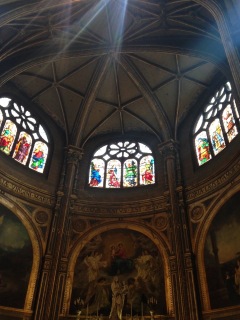 Since it was drizzly and cloudy today (my favorite weather in Paris), I sat in a cafe with two girls for a bit to soak up the atmosphere and watch the city go by. I had a cafe creme and they had chocolat with whipped cream. I kid you not, their drinks were three inches of hot chocolate and four inches of whipped cream with a straw. It’s bliss to sit under a red cafe awning in wicker chairs and watch the grey rain in the streets.
Soon, I went with a group to the Rodin museum and garden (wow, I initially spelled that “gardin” and had no idea why it was underlined red – French is rubbing off). The metro was insanely jam-packed. At first we thought it was because it was rush hour from work around 5 p.m., but we’ve travelled at this time before and it wasn’t so crowded. In retrospect, maybe it was because of the rain. Anyway, the metros were packed with people like sardines. People would flood out of the doors, leaving no time for us to get on before the doors close. One time, someone got their foot stuck in the automatic doors as they slammed shut, and people had to pry the doors open so his foot wouldn’t be like ripped off when the metro took off. Scary.
The Rodin Museum is under construction, so we could only access the garden and one exhibit for a reduced price. I really enjoyed the garden view, which reminded me of the Vaux le Vicomte architecture because it was yellow and palace-like with a lovely rose garden and cone-shaped tree hedges. It’s also seen in “Midnight in Paris.” 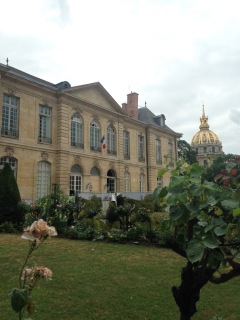 The inside exhibition was not as gorgeous as the garden, but still cool to witness how Rodin created rough edges to see that artist’s hand and how he morphed the body. I liked him more after seeing this museum to get a better look at his style.

After the museum, I rejoined the two girls from the cafe for dinner. I really wanted to try a restaurant with a green awning around the corner from our hotel, called L’Alchimie. Teo had originally recommended it, but then others from our program went and apparently a girl cried because it was so good. We went in with high expectations, though I tried to lower mine so I wouldn’t be disappointed.
The menu, first of all, was oddly translated and poetic, like one item that said “with crystallized shallots crushed by blue (bruise) of former days.”

This was a special dinner for us, with three courses. I decided to order things I’ve never had before and we all three got all different things so we could try each other’s. For the entree, I had carpaccio of beef in the pesto crumble of parmesan cheese. I was a little nervous to try raw meat, but their dish made it very manageable. I pretended it was like thin ham, and it was so flavorful – covered in oil and garlic and pesto. It was just soaked with that flavor. I also tried the other girl’s foie gras and the other’s asparagus soup (which was the best – essentially cream and asparagus, reminding me of broccoli and cheddar soup).

For the plat, I ordered pig’s rib with assortment of vegetables. I don’t even like pork that much, but this was just so good and hot. In fact, it came out so hot and fresh that by the time I was done, the meat had cooked itself to be dry (but for the majority of my meal, it was perfectly juicy). In the photo below, the vegetables are hidden by a “meadow” as one girl said of herbs, but vegetables lie underneath. I can’t even explain the flavor. None of us had even tasted this flavor in our lives. It was like a butter acidic maybe citrus bitter taste that these carrots, zucchini and shallots had been marinating in for so long. They fell apart they were so soft. One girl said it was like a part of her brain was lighting up from tasting this completely new nameless flavor. The best part was the sauce (again, unlike anything I’ve had) and what I believe are mashed potatoes under the herbs. It was a smooth ball of light yellow, and when I first tasted it, I thought it was pure butter. It tasted like pure butter, in a good way. Wonderful! 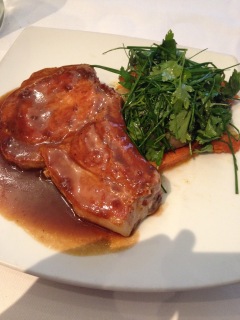 For dessert, I felt that I needed to try a fromage plate while in Paris so I did. It was a brie, a goat cheese and some other type of sharp cheese. While their flavors were very good, especially on the warm rolls they came with, by the end of the meal I felt I needed something sweet to finish it off. So, I was kind of unsatisfied by the whole palette of the meal because I had two meats and cheese – all savory and salty. However, it was my fault for ordering this way. I chose dish by dish instead of a full balanced meal. The two girls got strawberries with cream and basil jelly, and an assortment of sorbets. The mango sorbet had real junks of mango and was very refreshing. The girl with the strawberry basil almost cried because it was good. I liked both their desserts, too, because of their simplicity and light sweetness. 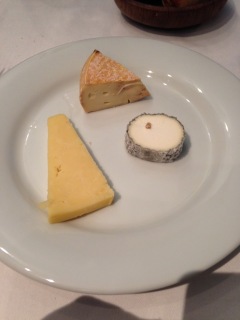 It was a good French meal treat. More expensive than normal of course, but we needed to go here before we left.