This morning we set off to one of Teo’s London recommendations – Portobello Market in Notting Hill. It was about a 40 minute bus ride, but so worth it when we got there to see the adorable little town houses with colorful doors and paint. It was a lot more quaint and local-esque than central London. 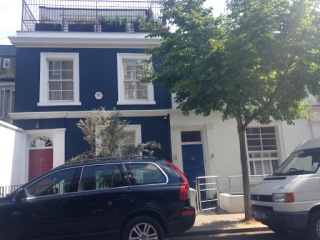 (Hi Mom, this is a blue door in Notting Hill just for you 😉 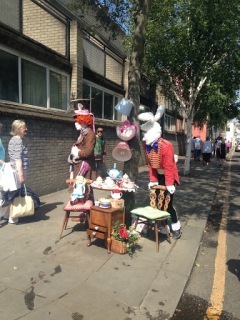 (At the entrance of the market, there were people pretending to be Alice and Wonderland characters. And this was no cheap make up – this was detailed with a set and props)

The market was an excellent recommendation, as blocks upon blocks of little stores had vendors outside selling silver goods, bags, scarves, antiques, souvenirs etc. It was a wonderful market; I’m learning that markets here do not usually mean food. I really enjoyed the crowds of people looking at these items for sale even though it was a little overwhelming deciding what to buy.

I ended up getting my sister an English straw hat and my mom a little flower-patterned English creamer.

At about 11:30 a.m. we set off walking towards Kensington Palace. This is an illustrative example of one annoying part of London: everything is called the same name. For example, we initially got lost at our residence because there’s a Camden Market, Camden Station, Camden High Street, Camden Garden, and Camden Town. Kensington was similar. Imagine us walking from this market without Wifi or directions, aimlessly following street signs to Kensington Palace. Then the streets are called Kensington Garden, Kensington Terrace, Kensington Garden Terrace… you get the idea. Which one do we take?!
Eventually we did see a fancy gate that we assumed went on their street. Photography wasn’t allowed, but all the houses were white and gorgeous, until eventually at the end we saw the red bricks of the palace. Kensington Park had some dead grass but was otherwise cheerful. The set of gates facing part of the palace displayed flowers, happy birthday balloons and signs and pictures of Diana. I’m assuming her birthday is near.

Next up on our itinerary (which, by the way, we planned last night and used Google maps at our residence while we still had wifi, so pat on the back to us for that) was Harrods. We took a bus from the sidewalk near Kensington to Knightsbridge and turned the corner to see this huge store that had to be Harrods. Little green overhangs trimmed the bottom floor – the store in general reminded me of Macy’s in New York City or something because of how big and beautiful it must be at Christmas time.

I can’t even explain how confusing the layout of this store is for me. It’s open, with pathways walking through stores instead of closed off rooms with doors, and elevators at the heart of this nightmarish maze. They have employees all over the store with gold sashes (like in beauty pageants) just so you can ask them where to go. Designer stores, suitcase stores, housewares items… it was like every store packed into one. Finally we made it to the Tea Room, which was one of the top things I wanted to do in London.

We only had to wait in line a little bit, and then they sat us down against a green cushion in a bright yellow room. Everything is served on Wedgwood – a pretty strawberry pattern – and made me feel super fancy. I ordered “The Wedgwood” tea meal, which includes a tea (I chose the 1849 blend from India), scones with jam and butter, finger sandwiches and a dessert choice (I chose salted caramel sea salt). 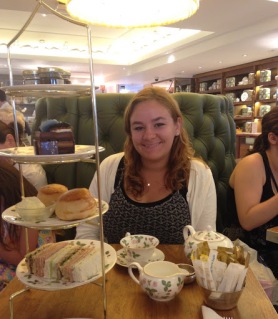 The scones were not as rough-textured as in the US, but looked more like giant cream puffs in shape and were tasty with the thick white butter and strawberry jam. The baby sandwiches were cream cheese and cucumber, cream cheese and salmon (delicious despite my usual indifference to salmon), and a roast beef bleu cheese I gather. My dessert was wonderful (of course it has to be my favorite) as it was a layered cake-like pastry with a dense chocolate bottom, soft caramel custard in layers and lighter chocolate cream, adorned with chocolate candies. It was so rich I absolutely couldn’t finish it! 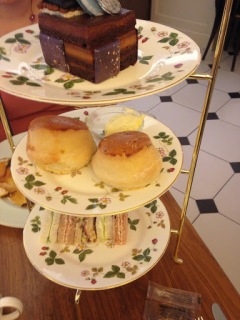 I’m very glad I could have this experience while in England – what other way can you eat lunch here? Eve though I think it’s supposed to be a dish in between lunch and dinner, oh well.
We hoped on the tube (our first underground experience) to Westminster to catch our free boat ride. Luckily our voucher allowed us to skip the long line of ticket-buyers and we boarded a huge boat on the Thames. Don’t know if I mentioned it, but this river is so much dirtier than the Seine.
Our boat tour lasted almost 30 minutes as our funny guide pointed out famous landmarks along the way. He joked about one of the alternate languages on the headset guide being American.

(London Bridge finally- the fifth one in 1,000 years!)
Our ticket enabled us to go by boat all the way to Greenwich, but we got off at the Tower of London since Greenwich would apparently take another hour and we wanted to see some other sights.
I’m learning that everything touristy in this town costs 20 pounds. The Tower was no different, and it was closing in an hour. Yet the museums are free?! What.
So anyway, we admired the castle-like brickwork, watched the Tower Bridge be lifted, and went in line to see the crown jewels.

The line to see the crown jewels was unreal (not actually that bad, I’m learning some can be worse) but the entire exhibit was a dark room with an assembly line of being in a school of fish moving to see a gold scepter. We stepped on a flat moving escalator, like those in the airport, to see the crowns. The diamonds were so beautiful and the crowns emanated power. We noticed the christening items were gone and had signs that said “in use” because of Princess Charlotte’s christening tomorrow, we presumed. Despite the ushered crowds in the dark hallways, I did like going in these castle towers to see gems. No pics allowed inside, unfortunately. What does my money buy me?!

We had time to go in the white tower, too, to see knight armor, cannons and an indian headdress.

Once the tower closed, we took our new best friend, the tube, to St. Paul’s. It was stuffy inside the tube, even though it’s perfect summer weather here. Breezy and sunny! However, once we got to the cathedral, we saw that not only is the admission 18 pounds, but also that it closes at 11:30 a.m. every day?! What?! New theme of London: “What?!”

And we learned that it’s closed for sightseeing on Sundays, so sadly I won’t be seeing the inside for myself. I guess I’ve seen a good amount of churches in Europe thus far. The outside was still nice…

Below is the bonus pic of the day: classic Brits, watching an outdoor screening of Wimbledon in a square outside St. Paul’s Cathedral. Can you get any more English? Maybe add some tea and a union jack. 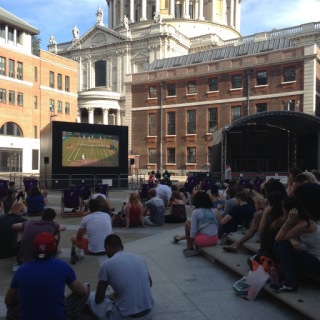 By crossing a bridge (which was featured in the delightful Harry Potter films), we walked to Tate Modern which (thank God!) was open and free – we lucked out there.

However, unfortunately, the main gallery in the center of the building was under construction. I remember hearing that usually the whole room is a modern art piece, but this time it was just empty with a sign saying it’s changing soon. The information desk said an exhibit is only here six months of the year; we left, but I was still glad we attempted to see it – nothing we can do about that. And it was still very big and open. 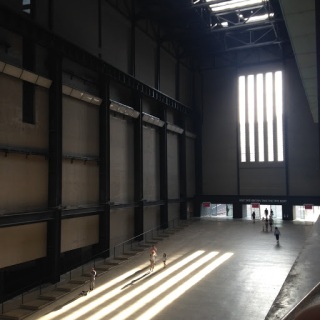 By walking along the south bank towards the London Eye, we scouted out where we could eat. Eventually we just went into a random bar/restaurant/something and I had fish and chips because in England, French fries really are called chips so I had to. A lot of restaurants advertise fish and chips in huge print, so I figured it must be a popular choice here.

(I found humor in the ratio of vegetables to all other food. Sadly, this is more vegetables that I’ve been having in Paris and London. How are people here at all fit?)
The fish was actually probably the best fish and chips I’ve had, because it was crispy and not soggy, and wasn’t separated from the fish but actually cooked onto the fish well.
To end our evening, we caught the night tour bus near Westminster Bridge after hurrying from dinner. The last tour begins at 8:30 p.m. even though the sun is barely starting to set. It was very beautiful because it had a different route than usual, through the west end by the Marble Arch, Soho, Oxford Street, Piccadily Circus, etc.

(Marble Arch – old entrance of Buckingham Palace)
I thoroughly loved this night tour, because I love cities at night – especially with dazzling lights. This area was described as the young area that stays open late with shops and pubs and squares. It reminded me of Times Square because of the lights – and I savored the view from the very top of the decker bus. I could’ve ridden it all night!

(This is blurry on purpose because I’m artsy…)
We got off the night tour early because we didn’t want to be out late in the dark, going back to the residence on the bus and walking back from the bus stop. But we did stay to see the sunset in front of Big Ben. 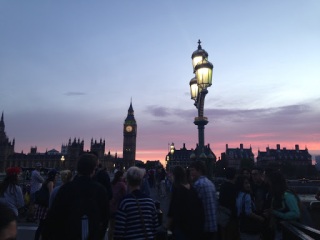 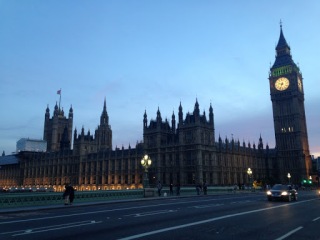 That’s it for now, London! You’re growing on me, though sometimes you’re overwhelming. People are much stranger here – they have dyed hair and piercings and like skulls and books. I can’t believe I came into this country without a real plan and sometimes without direction and managed to survive. I was definitely lot more independent and responsible here because it was just me and my friend navigating this cosmopolitan capital.
The English are a lot more eccentric than Parisians, but it is also exciting watching specks of people on the street hanging out at night in Trafalgar Square or in side streets. Happy 4th of July, from the country we declared independence from – très ironic.