Today our walk and lecture were integrated, so at 10 a.m. we took the metro to Bastille. A statue marked the place where the revolutionaries stormed during the French revolution.

This area still has many furniture stores today. Teo also said that Bastille is a really hip, young area of Paris with a lot of nightlife. I think it’s interesting that each neighborhood of the city has its own flavor or signature. Bastille was a bit more modern than the other neighborhoods, which is still less modern than American cities. It just seemed a little more metropolitan and new.
For lunch, we stopped at a daily market that, like the market by our hotel, blew my mind. It was blocks of flowers like peonies and fruits like cherries and peaches. An inside portion contained a seafood market and cheeses and milk and other animal products. It’s pretty strange to see a huge counter of ice with crabs and oysters and scallops.

We decided to get cheese breads at the bakery nearby, because we couldn’t cook the seafood obviously. I had a ficelle lardon that the baker warmed up – she was very friendly to us and let us use her bathroom in the back. Even though it was so tiny that my legs touched the door and we didn’t know how to flush it, we were grateful that she was so nice to us. I also found pleasure in watching her regular customers come in and speak French to her, as she cut a slice off a huge loaf of ciabatta or tossed them a baguette.

The next part of our walk was in a park that was transformed from old railroad tracks, so it was suspended above the city as a long path with plants all around. A clever way to add nature to a city, in my opinion. 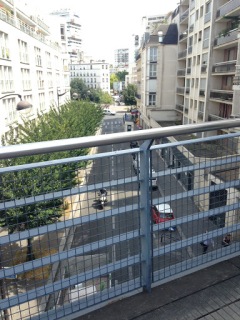 The last thing on our sweltering walk (it was in the 80s I believe!), was the train station Gare de Lyon. Teo said around the 1800s, the train stations were like palaces or often nicer. This was true – I could’ve sworn the inside was in a movie at some point, because of the architecture and high ceilings and trains lined up ready to take off. Like many parts of Paris, the picture doesn’t do it justice. 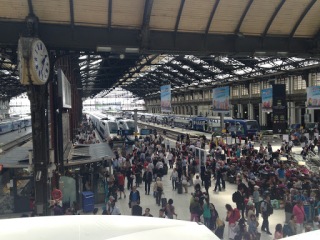 By peeping into a restaurant inside the station, we spotted a painted ceiling with gold adornments. 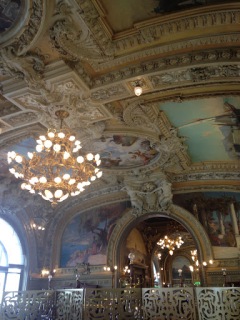 After the station, we were on our own for the afternoon and evening. A group planned to go to Musee D’Orsay so we took the metro and dragged ourselves in the heat through the Louvre’s exterior, across the river, to the D’Orsay museum. The museum, it turns out, is also inside an old train station with a huge clock watching over the sculptures below. Each floor has a different era or artist, so we split up to prioritize the ones we wanted to see.
My favorite floor (which was five rooms) was the impressionist, maybe because those are the ones I learned about in modern art class fall quarter. Nonetheless, it was amazing to see Cezanne, Van Gogh, Monet, Manet, Gauguin and Courbet, who were some of the main artists from the class. I loved witnessing their unique styles as they progressed through time. 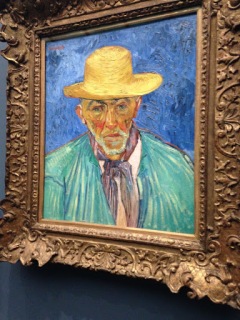 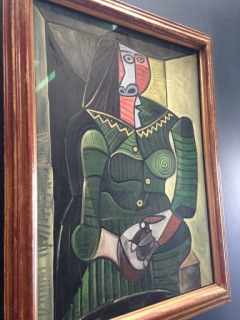 It’s unfortunate that we’d been walking for four hours prior, because my feet hurt so bad while I was looking at the museum. We stayed for two hours – of course we didn’t see everything but I’d say I saw a lot and everything I really wanted to see. At the end, I walked around fiercely trying to find Olympia and finally found the last painting on my mental list.

I was also surprised to see how big these paintings were! In my class, we didn’t know the scale, but in person many of the most famous ones were the size of a wall, like Manet’s Luncheon on the Grass.

For dinner, we stopped at a nearby cafe, away from the tourist areas. The four of us ordered salads because we needed some vegetables and had just nibbled breads for lunch. They were actually good – mine had ham and swiss cheese on it too. Oh, and I almost forgot – we stopped at Amorino’s for flower-shaped gelato down rue du Commerce.