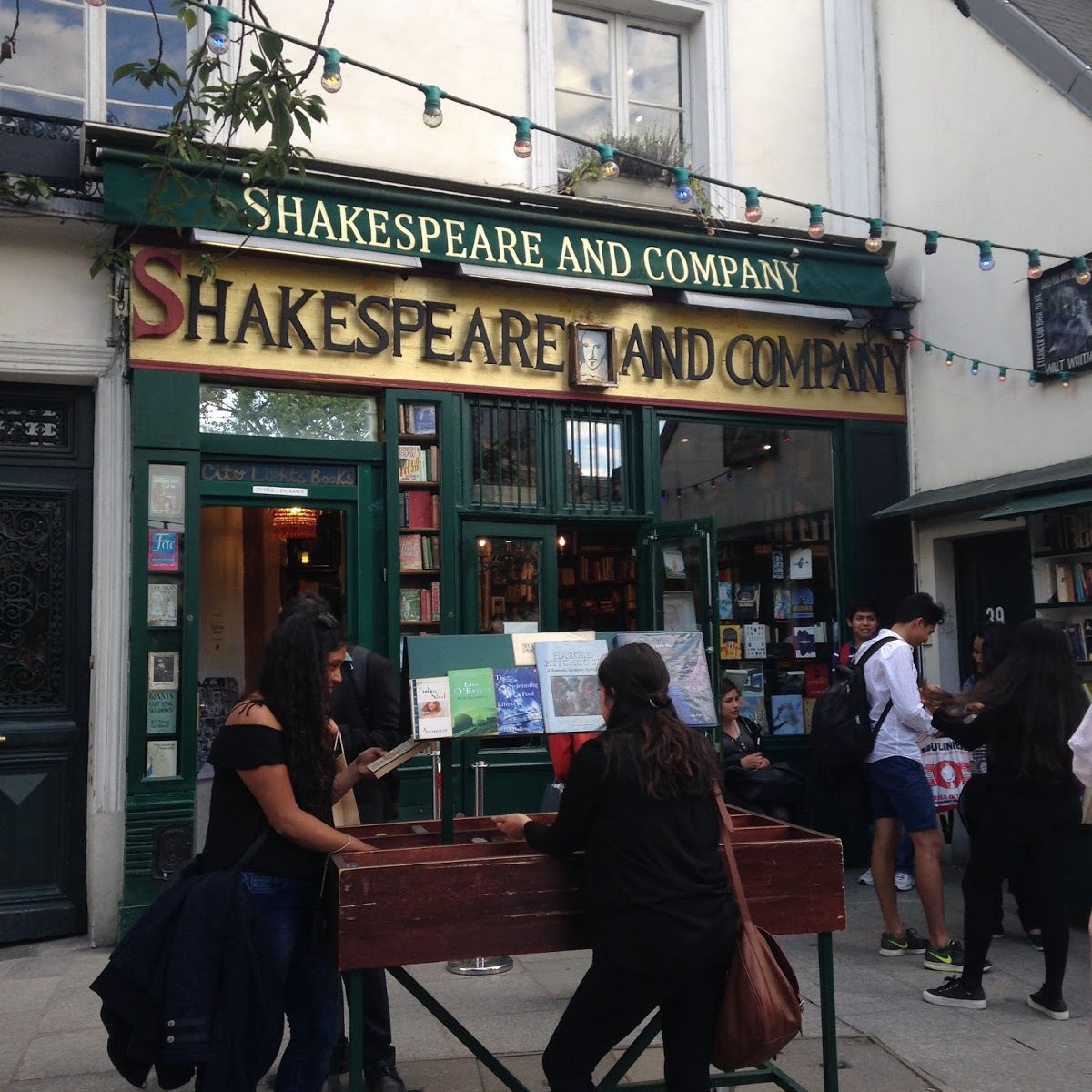 Bonjour! This morning, we began lecture in the courtyard outside our hotel to learn about the division of Germany and France among kings. At noon, we were on our own for lunch, so a few of us went to Le Commerce Café and shared penne carbonara (a cream sauce with ham and a raw egg yolk) and a tuna pizza. Though we’d brought notebooks and books to read at the café, we ended up just leaving to walk around the streets. 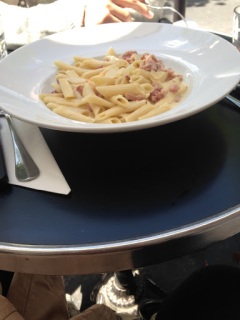 One of the girls is making a fashion blog with pictures of Paris street fashion, so we approached people and tried to introduce ourselves in French, compliment their outfit and then ask to take a picture for a project du UCLA. Their reactions were so funny, but they loved it! One girl was genuinely completely shocked and surprised to be asked, one older woman was very flattered, and one young woman was super friendly and talked to us (well, to one classmate who learned French in high school). This woman worked at a fashion boutique so she was very touched and told us that her fiancee lives in LA. She only spoke French because she said her English was too poor to speak to us. 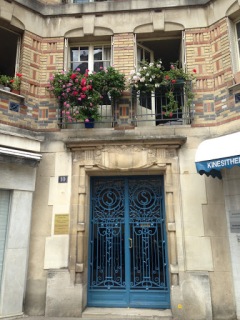 At 3 p.m. we left for our daily walk – a long one. I’ve come to realize that the walks are like personal guided tours that Teo has created using his Parisian expertise. He points out amazing places, but since we have a huge group it’s not feasible to actually go there, so we walk by and are encouraged to come back to explore further on our own. It’s tempting not being able to go inside, but I’m very glad we are told which places are tourist traps and which are truly worthwhile.

The metro left us at Odeon once again, and we walked for four hours. Many streets previously housed authors and poets, like Sylvia Beach, and we saw a route that Hemingway often took to Gertrude Stein’s house. Our group, with some lagging behind, ventured into Luxembourg Gardens to see where the Parisians relax on Sunday afternoon. The back of the Senate building is across from a dark koi fountain. The rest of the park is lined with paths, statues, flowers, children and small metal café tables for resting. It was filled with jolly people. 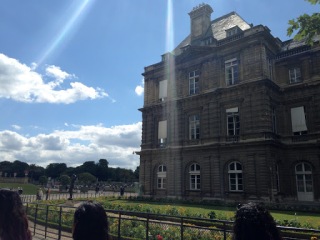 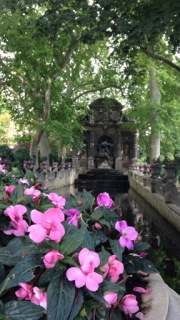 We were allotted 15 minutes to spend inside a classic church called St. Sulpice, adorned on the outside with huge columns. Inside, we saw stained glass, high domed ceilings, candles at altars and wicker chairs littering the floor. 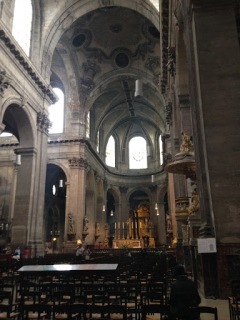 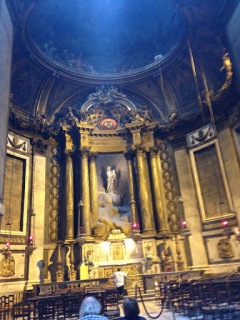 Teo took us to his favorite courtyard in Paris, Place de Furstenberg, which isn’t famous or grand or anything, but it’s a cute, tiny nook that is quiet. Well, today there were boys playing soccer there, but normally it’s a little courtyard the size of our hotel room with a lamppost and buildings all around. I love that the buildings are only ever six stories high, because it makes it feel homey rather than like a skyscraper city.
Finally, we walked by Shakespeare and Co. and Notre Dame. The latter is insanely impressive, and I can’t imagine it being built nowadays. We saw the arches and the gargoyles and the pointy peaks piece the sky. Teo said the gargoyles were built to serve the purpose of ejecting water away from the building through their mouths.
Some classmates and I are planning to return to actually go inside. 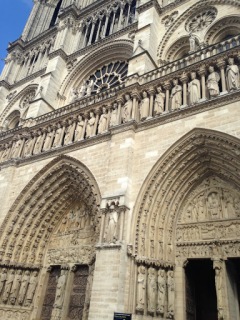 Teo left us at Berthillon across the river, where he said they sell the best ice cream in Paris. So we all got in line, filling the sidewalk and attracting other tourists who saw the line and joined too. I ordered a scoop of pistache and one of caramel beurre sale for 5,00 euros. While it was a little expensive, it was very worth it. Instead of icy like American ice cream, it was so soft and smooth and creamy. Although I don’t usually like pistachio, I ordered it because the employee said it was the best – and it was! YUM. 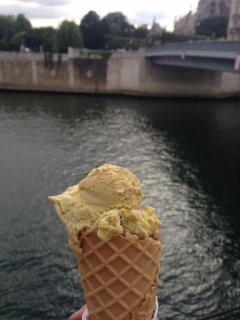 After sitting on a ledge to eat our cones, a group of us went back to Shakespeare and Co. to browse around. It’s quite small and crowded, and many of the downstairs books can be bought in America. There are many classics and a whole Shakespeare section of course. Upstairs, there are old books with dusty spines and crammed couches to read. 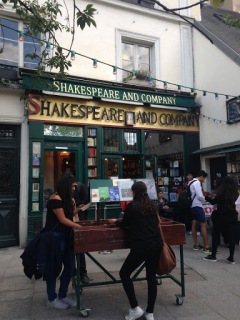 Once we arrived back in our neighborhood, we wanted to get dinner. After looking online, we saw an Indian restaurant that looked good to a lot of the students who loved Indian food, so we went out to try to find it. We ended up not being able to find it, but we found another Indian place that was good. I had butter chicken with rice because I don’t have Indian food often and it’s pretty simple.
Humorously, the employees thought we were British because they heard us speaking English. I guess, similar to how we can’t tell French accents apart, they can’t tell English accents apart but it just sounds like the language.
While strolling back to the hotel, we spontaneously decided to walk to the Eiffel Tower to watch the lights. It’s very pretty at night, and there are tons of picnickers on the lawn. You can see some strange people there, like stupid tourists with selfie sticks in the middle of the street, or this one nice French woman with her husband who said it was her birthday and offered us her leftover champagne because she couldn’t finish it and was leaving. Though we didn’t drink it, she was very nice to us. 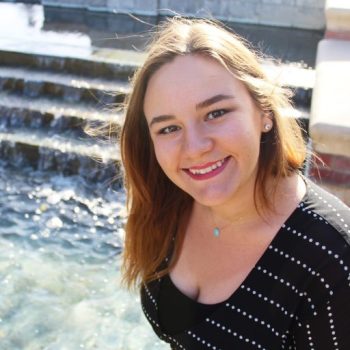