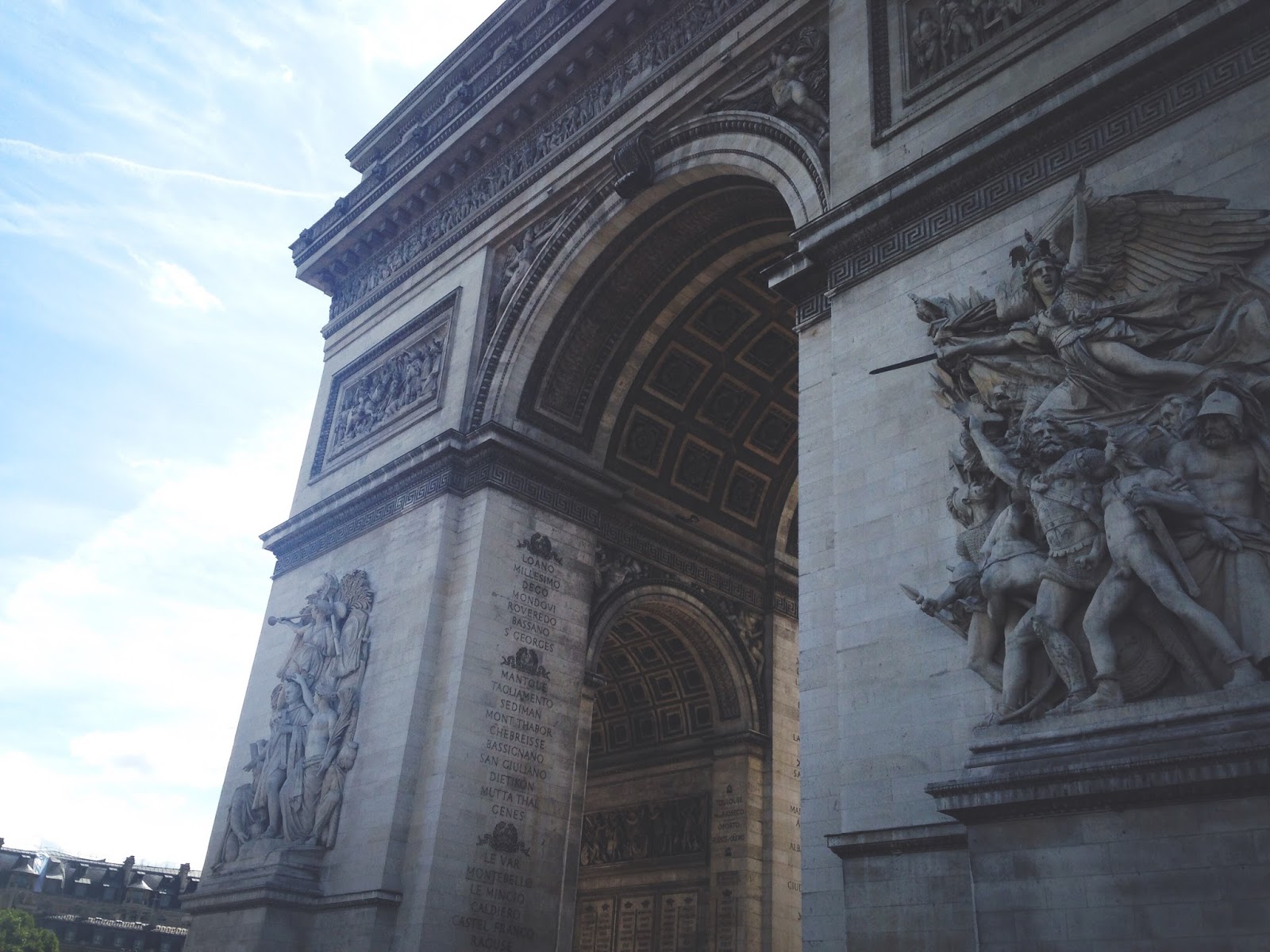 Teo says we aren’t tourists, because we will become Parisians. Since we don’t visit many tourist locales in class, some of us decided to go to the Arc de Triomphe ourselves. It was easy on the metro, as we emerged from the tunnels to this huge looming archway. I had seen pictures of it but none of them can convey the huge scale of this piece of architecture. It’s enormous. 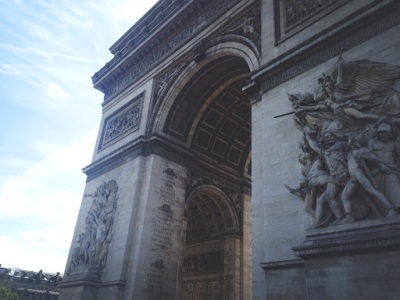 What’s more, the cars racing by are essentially in a six-lane roundabout but with no lights, signs, or lane markings – they just wait for each other and weave in and out of each other’s paths. A tunnel takes you under the busy street and right below the Arc, where you can see a fire and flowers that pay tribute to soldiers, and get a more up-close look at the detailed structure.
From there, we bought a ticket to walk up the many flights of spiral staircases; it was a calf workout but we eventually made it to the top. The view is certainly worth the pain: you can see all of Paris in every direction.
In America, we never plan out cities so that major roads will all intersect in a spoke-like pattern, leading to a giant archway in the middle. It was astonishing to see the stone roads all connect to the Arc, and seeing rooftop after eclectic rooftop and iron shutters and ivy on buildings. Of course, the Tour Eiffel stands above it all. It’s like the Empire State Building view but better because everything seems better in France.

The hike back down was much easier, and some girls left to go rest at the hotel. I stayed with a friend to people-watch across the street near the Champs Elysees. They’re mostly tourists striking weird poses in front of the Arc, like ballet poses or peace signs or pretending to pinch it. The two of us strolled down the shopping street but it was just filled with tourists, and I decided it was the Times Square of Paris, but older.

At 7:15 p.m. the group met in the hotel to go on a picnic in front of the Tour Eiffel to celebrate the holiday today. The lawn was packed with picnicking groups like us. Teo and his wife Scarlett distributed baguettes, sausages, salami slices, chicken, brie cheese, bleu brie, and some soft cheese that was either fig/nut or chive and tasted just like flavored cream cheese. We also had small pickles, cherry tomatoes, oranges, cherries, and chocolate cookies.

At about 9:30 we left for Teo’s surprise: a boat ride along the Seine! It began at 10 p.m. when it is still light in Paris. We piled into this open-topped boat and were sprayed by mist as we sailed along, watching the water splash against the cement canals. There are bridges everywhere whose decorated lights began to shine as the sun set. The boat took us past many famous buildings of Paris like Notre Dame, the Louve, and many we didn’t yet recognize though every building lining the radiant water was old and classic. 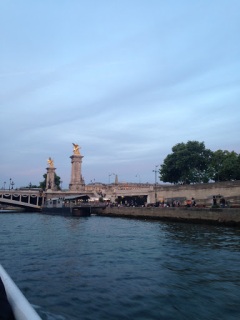 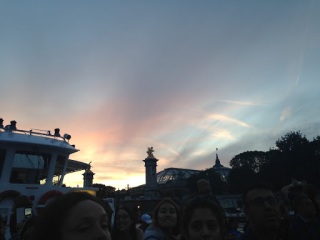 So many of the passengers just snapped photos the entire time, but I’ve really been trying to limit myself on photos so that I can just enjoy the atmosphere in the moment. I loved dusk, watching lights beam on as the sun set across the water. People were sitting on the edge of the canal, singing and dancing and shouting and eating and drinking to music, even though it was 10 p.m. 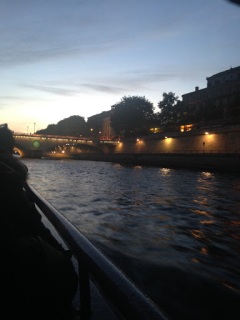 By the time we got back, we were absolutely freezing cold from the boat, but the Tour Eiffel was lit up and began to sparkle at 11 p.m. on the dot. 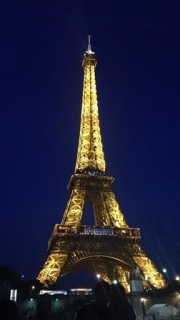 Walking home, I got lost with a couple girls as we found the metro rail that runs down our street, but we weren’t sure if the hotel was up or down so we walked to wrong way and eventually took the metro back at midnight.
Today, we began to learn how to be Parisians, but we also let ourselves be tourists for a day to sight see some of the many must-dos of the city.